It is still very much winter here in Wisconsin and while I have been taking photos over the past few months, much of it is on film and yet to be developed. I figured it might be a good time to stretch my writing muscles again and share a few prints and zines I have received from three photographers I follow on Instagram. 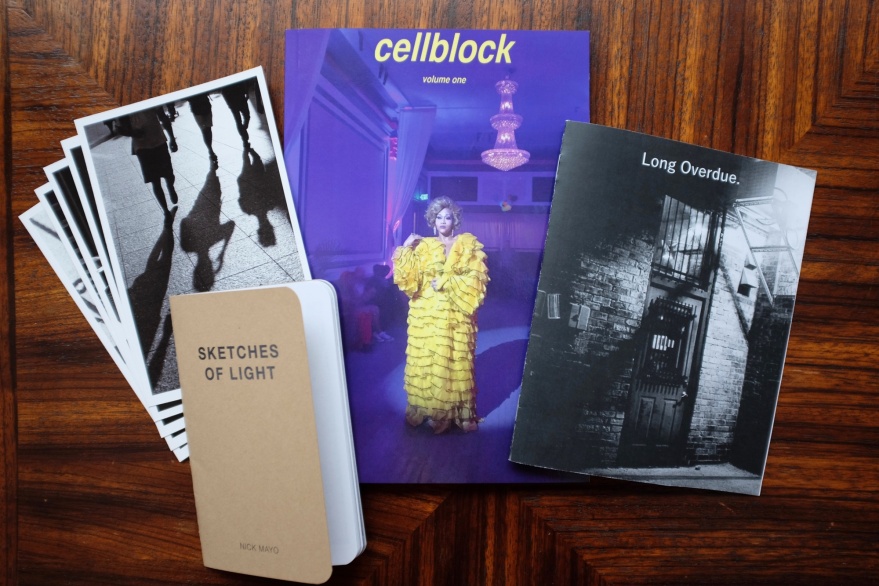 First up are some prints and a zine from Nick Mayo, @nickexposed. I got the 4×6 prints from Nick last fall. These are very nicely made on a matte paper so luxurious that the blacks can’t be described other than velvety. I’ve had these in their plastic sleeve and need to get them placed about the house for viewing. My favorite of the bunch is shown in the top photo. Influenced by Winogrand, no doubt. Nick is an enthusiastic supporter of the film photographer community and has amassed a nice following on his YouTube channel as well.

Just this week I got his zine, Sketches of Light. The design is similar to a small Field Notes book. Until I read his notes on the last page, I had forgotten that these photos were taken with his iPhone. A bit of a departure for someone who shoots film so often but for him like many, our phone is now the way everyday images are captured and it is with us nearly all the time. These photos are a collection of the shapes, textures and geometries of light Nick sees. I quite like it and the size works great for what I think he intended. It would be easy to stuff this in a camera bag to share with someone or to get inspiration from. A few favorite images are below. 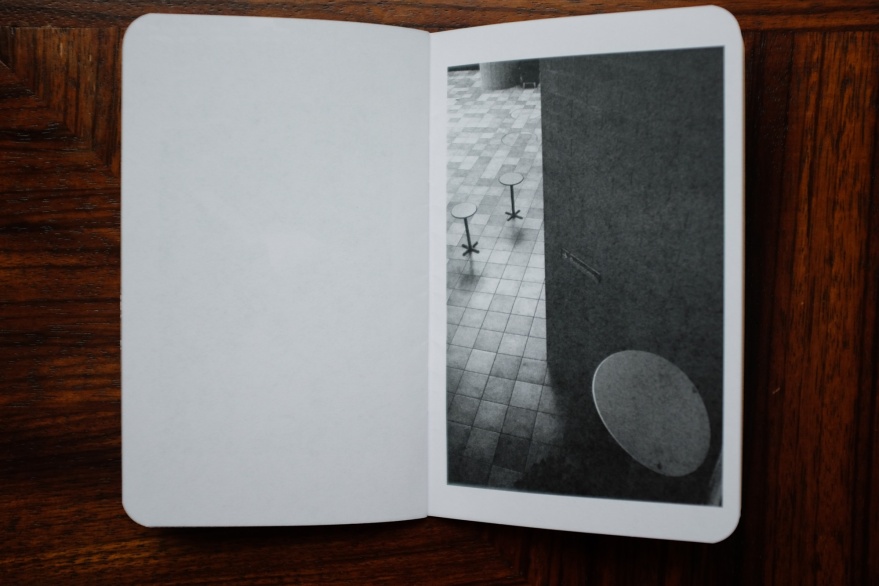 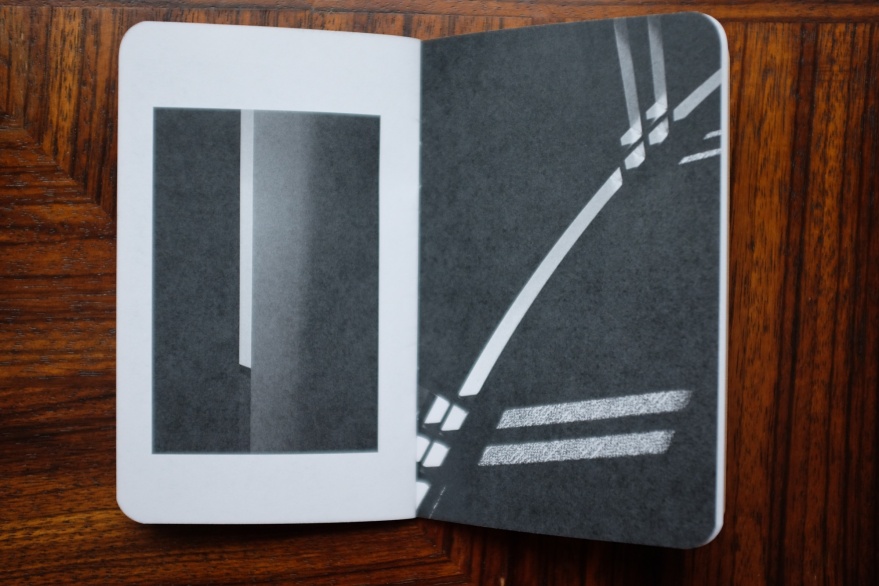 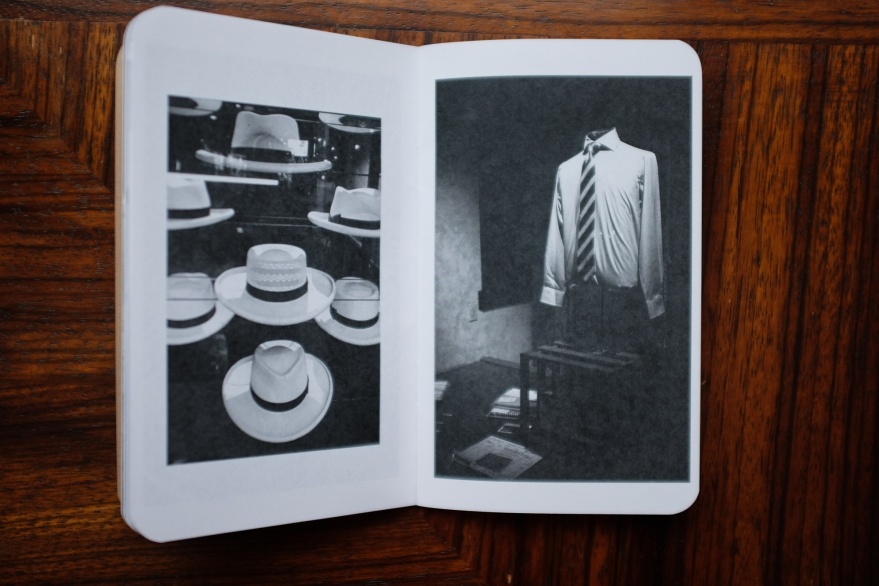 Next is the first zine from Ryan Niall Miller, @ryanniallmiller. I initially met Ryan through a Milwaukee photographer meet up via Instagram in 2016. Since then our paths haven’t crossed much other than a lunch meeting last spring to talk shop and get few prints from the film shooters meet up in Chicago he attended. Ryan is very positive and supportive of the photo community.

Late last year he released his first zine titled Long Overdue. It is a short collection of storefront photos shot at night in his hometown of Waukesha, Wisconsin. A pair of images that stood out to me are in the photo below. Ryan is always open to and looking for feedback and we messaged back and forth a bit about the project. It’s a great first effort and he was able to do it inexpensively while still putting out something of nice quality. I am looking forward to his next one. 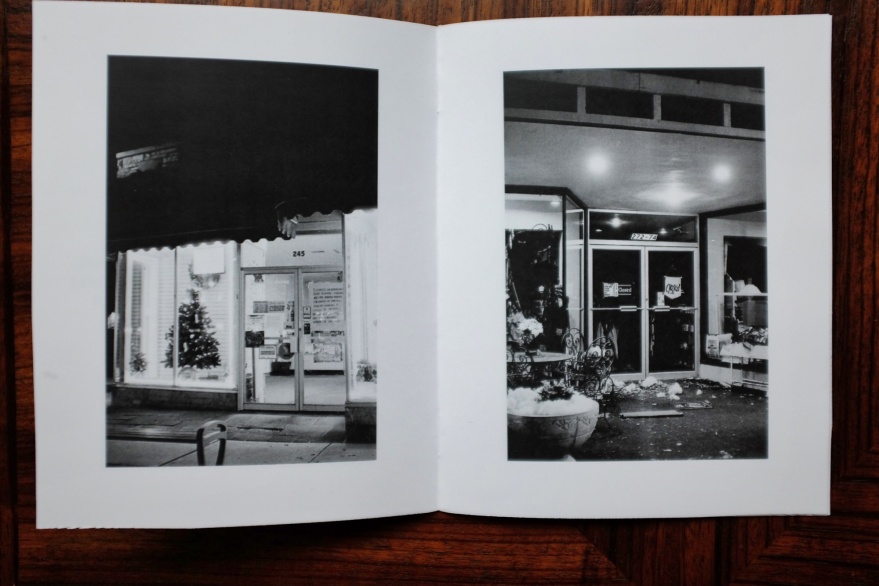 Cellblock is a bigger zine from Josh Sinn, @cadillacranchdressing. This is a collection of photos taken over a years time in Baltimore, MD. I believe I first heard about Josh when he was interviewed on Matt Day’s podcast, The Shoot. Josh is an avid film shooter and seems to be rarely without his Leica. Like Nick and Ryan, he is an active member of the Instagram community and although he shoots film regularly, the images in Cellblock are all taken with his iPhone. 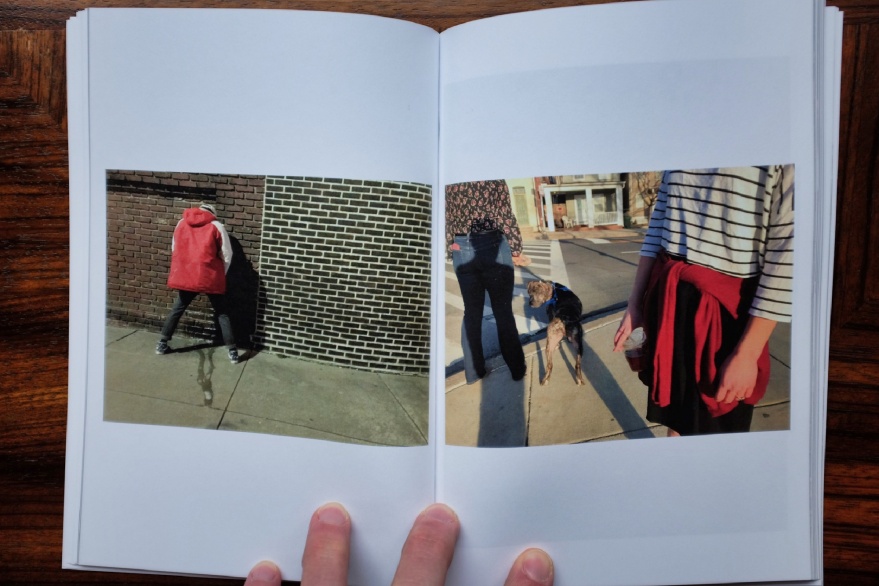 Paging through Cellblock, I was struck by the very documentary feel of the photos. It’s easy to feel like I know something intimate about the year these photos cover in a way that words alone would not convey. There are photos from his home, from the streets, from the clubs, and of family, friends and strangers.

Throughout the book I found the sequencing really delightful. Below are some facing pages where I think the pair of photos work together particularly well. 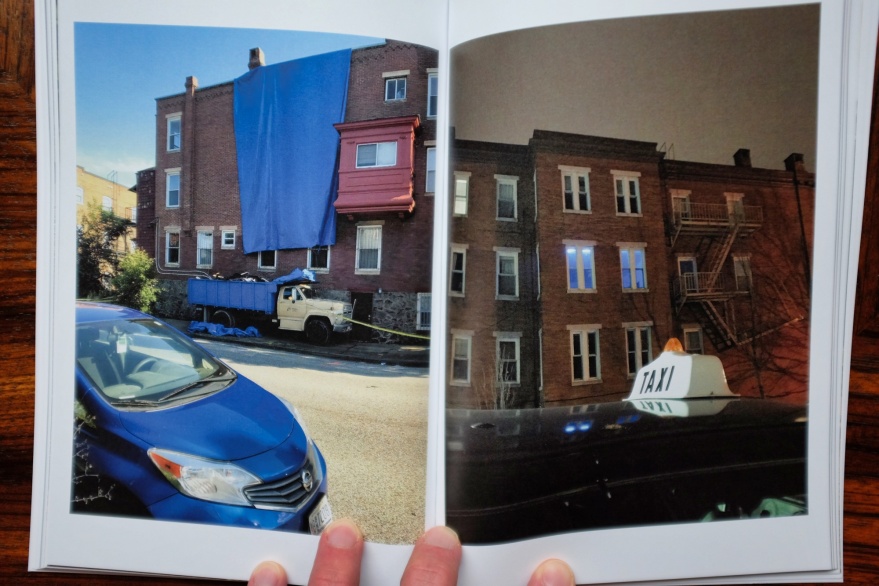 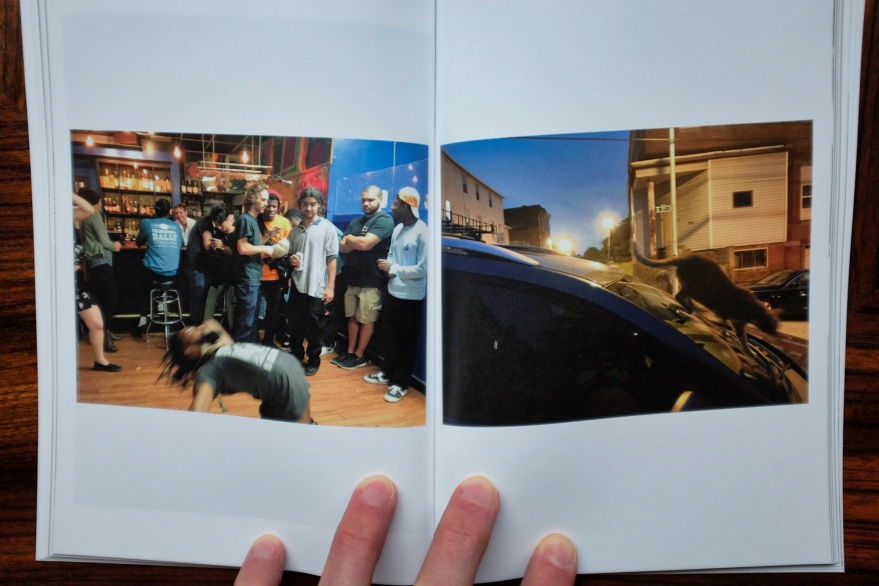 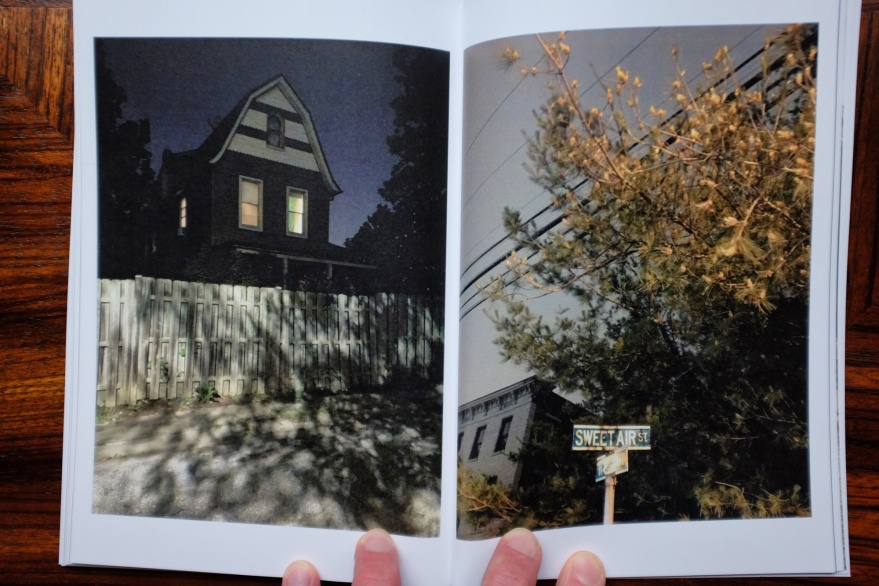 There you have it, prints and three zines. All are sold out as far as I know but give these three photographers a follow on Instagram and get to know more of their work. 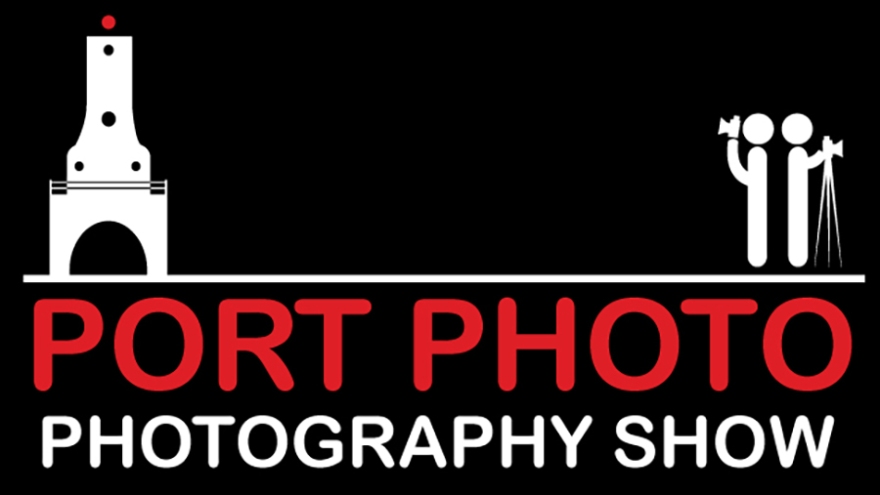 A quick note about this show of selected works from the photographers that participated in the Port Photo Walk on April 30th. This day was also Worldwide Pinhole Photography Day so most of the photos in the show are pinhole. For the second year in a row, the weather was lousy, cold, windy and very rainy. I shot a roll of 120 film with a borrowed Zero Image 6×9 pinhole camera. It’s a beautiful camera and since it wasn’t mine, I put it away before it was damaged and shot a roll of color film in the Mamiya M645 I had recently acquired.

The show runs until September 2 and is in the excellent little Studio 224 gallery, in the basement of the Boerner Mercantile building in downtown Port Washington, WI. It is open from 9-1 on Saturdays, 211 Franklin Street (north alley entrance). Many thanks to Martin Morante for arranging the photo walk and show. 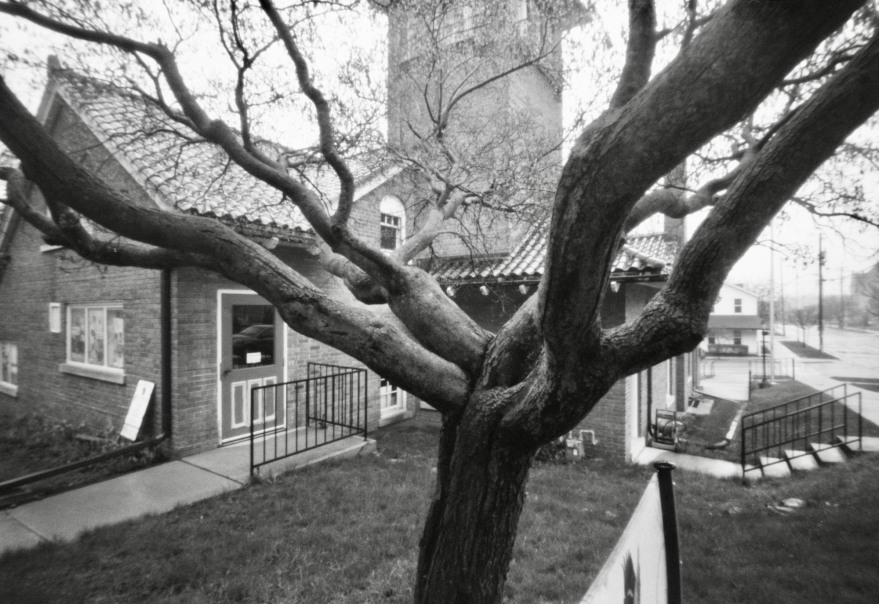 There is a lot of lament in some circles about the age of digital photography relegating nearly all photos to hard drives and only screen viewing rather than actual prints. While the argument can be made that more photos are shared now than ever before, there is something to be said about the print as a physical object that no amount of screen viewing can replicate. Working with prints is also a great way to evaluate and edit your work. 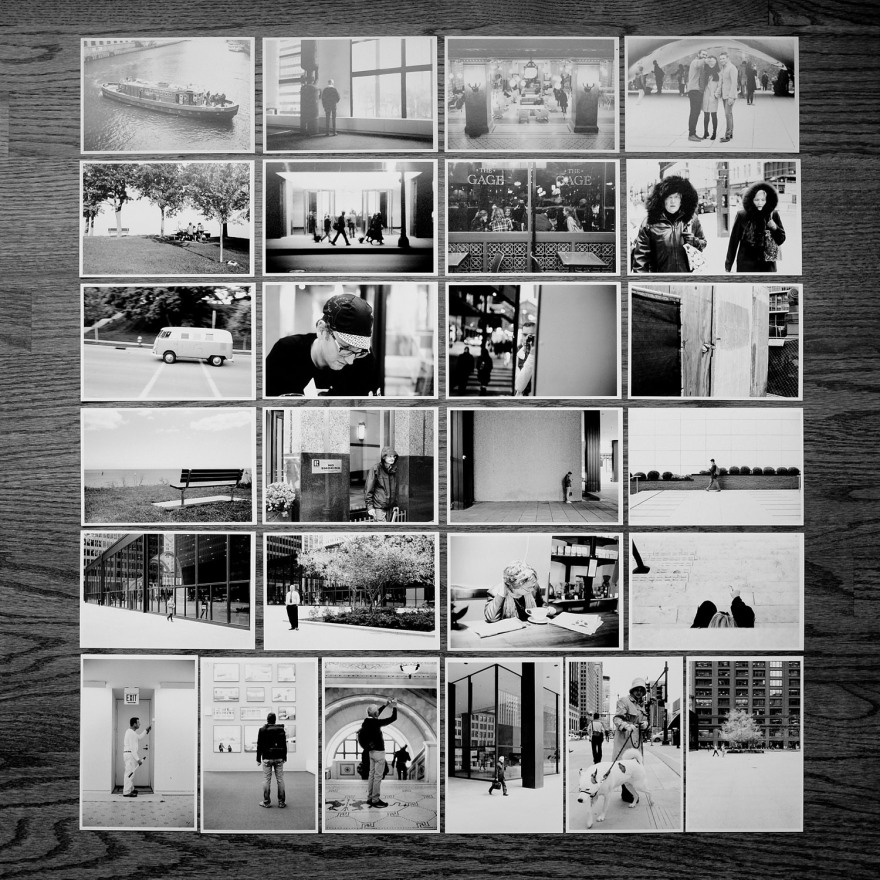 There are times though that individual prints can be a bit of a burden when your objective is to share them and not to cover your walls. We no longer need to assemble all our prints and insert them into photo albums with stripes of adhesive and then cover them with cellophane sheets. Printing on demand has changed all of that. There are many, many services for printing your photos in book form. Most are relatively inexpensive so I’d suggest trying a few to find what you like. Today I’ll review a service called Chatbooks which puts your photos into 6i x 6i book form. 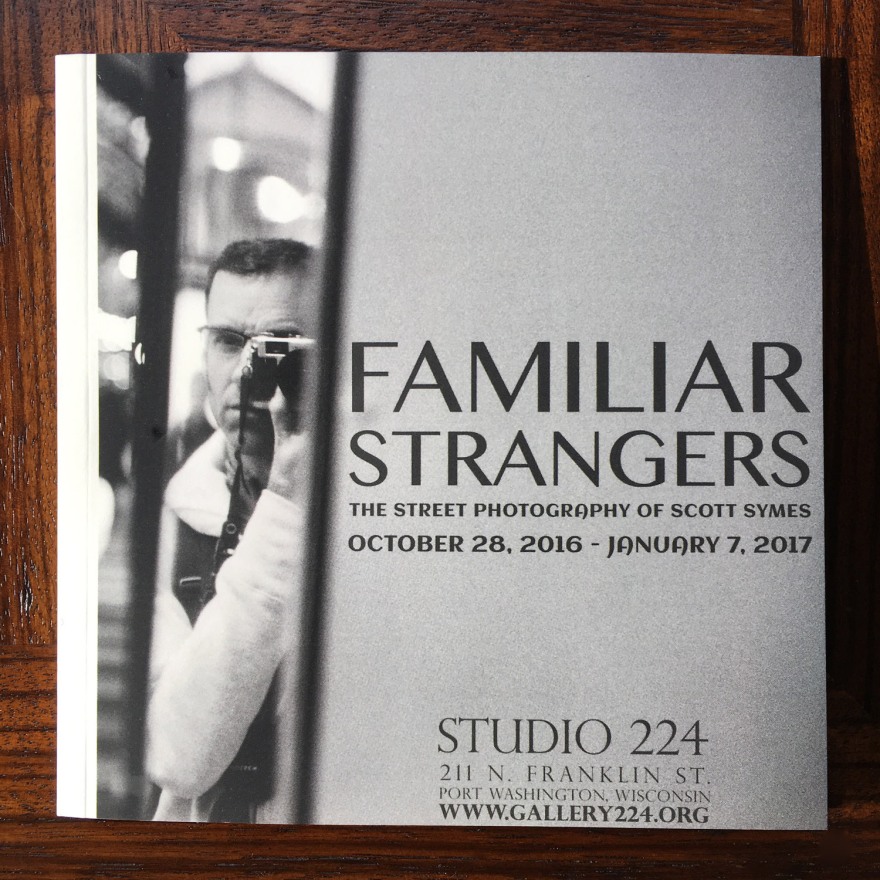 I decided to try them to create a compilation of the photos in my Familiar Strangers show. Chatbooks is first designed as a way to get your Facebook or Instagram photos into book form. Their entire app interface goal is to make this as easy as possible directly from your phone. You can also access them through a web interface which gives you somewhat more control over the images, text and layout.

Learning from a friend who had tried this service already, I went directly to their web interface to begin the book creation. Uploading images was straightforward. I wanted to have a text page opposite each photo and achieving that layout was a bit tedious. It was also not obvious how to turn off the on by default page numbering, photo date and caption options. Once I figured that out, I rearranged to the order I wanted and added the text on the opposite page (Location/Date).

Chatbooks does not offer an option to adjust font or size. If you add a text page, it will center the words (horizontally and vertically) on the page.  If you use captions, it will vary the font size to fit your words into up to three rows below your photo. This make sense in theory but if you have varied amount of words, you can end up with facing pages that have three lines of text in different font sizes. I was going for a fairly minimalist layout so I turned off the date and page numbering options and did not add any captions.

It took me a bit more than 45 minutes to upload the photos and finish the layout that I wanted. From there I previewed the final form and once satisfied, finished the order and uploaded the design to Chatbooks for printing. I chose the cheapest/slowest shipping method and 7-10 days later, my book arrived in the mail. I did get an email confirmation after uploading, a thank you email from the founder and his family, and an email again when it shipped. The tracking number provided upon shipment did not work for me. 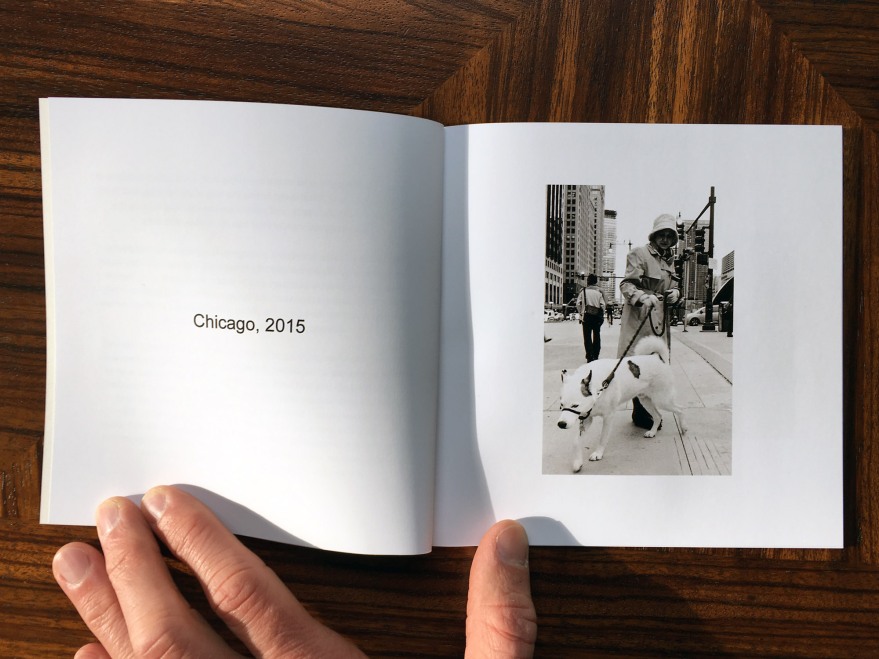 The finished book was a total of $14 ($12 + $2 shipping) and for that price, I am quite satisfied. The cover has a very nice, almost velvet feel. The printing is good for the money and the book looks just as I had hoped when designing it. The black and white images I used had just a slight color tint to them which is common in print on demand services. If you are using color photos you should not have this problem at all and the color examples I have seen look quite nice.